Can Buyukberber has worked with San Francisco based studio Obscura Digital as the art director of the project “Unseen Stars”. Obscura has partnered with GE and advertising firm BBDO to create, a 9-minute projection installation, celebrating 12 female pioonering scientists by activating the celestial ceiling mural of the historic Grand Central Terminal in New York. 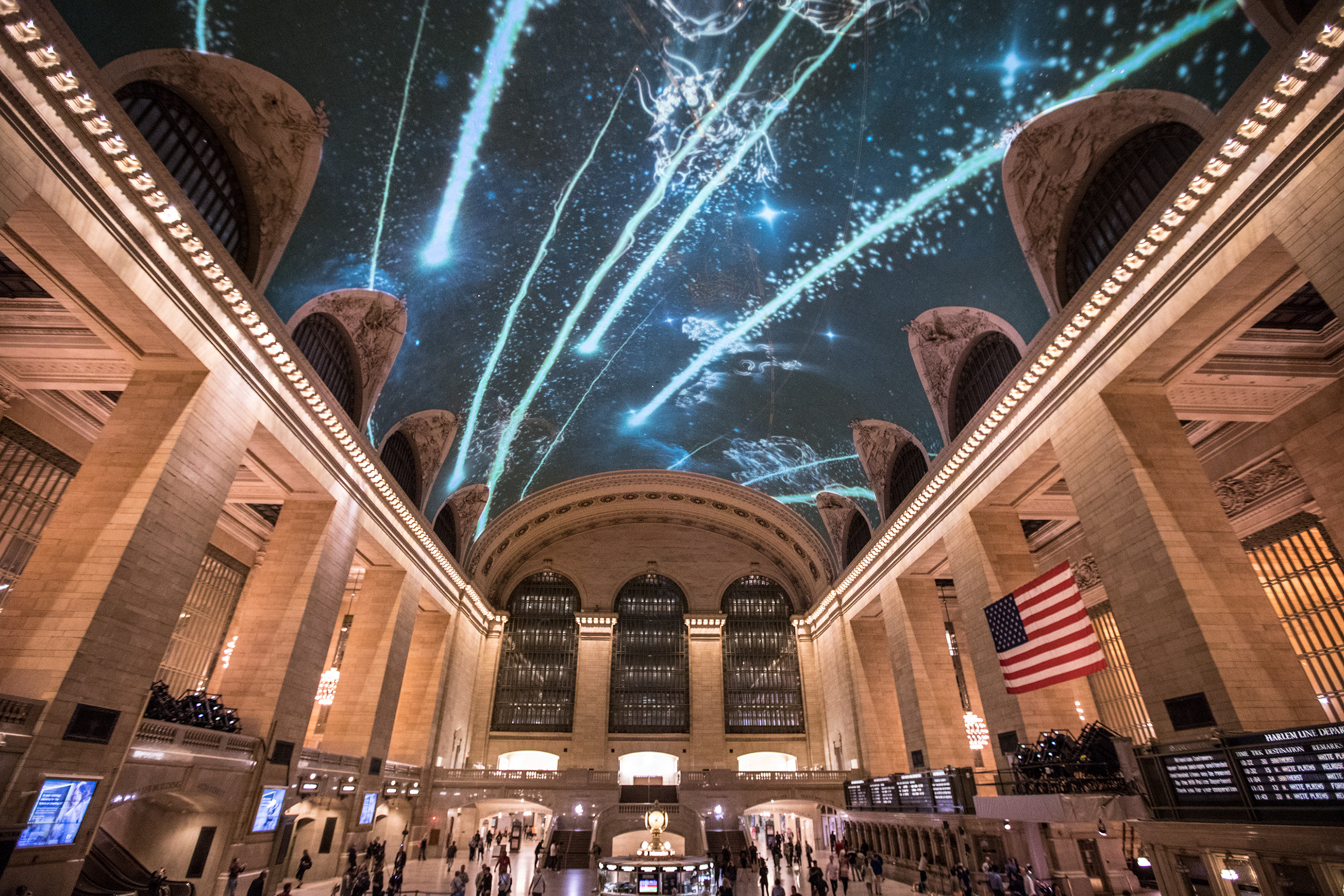 Photos by Joshua Brot -  Courtesy of Obscura Digital.
Commissioned by GE as part of their ongoing #BalanceTheEquation initiative to help close the gender gap in STEM, Unseen Stars features twelve women who have done amazing things for the advancement of science and technology. These women represents scientists and engineers from both the past and the present who have not yet been fully celebrated. The hundreds of thousands of people who pass through Grand Central Station every day can learn about them who they might not have heard of before.
From the physicist who discovered the evidence of dark matter, to the geochemist in search of life on Mars, a pioneering researcher in quantum gravity, a marine ecologist who led an all-women voyage to Antarctica to address climate change and the inventor of an algorithm to predict global incidents and disasters, the show features extraordinary women who achieved great things in the fields of science and engineering.
To adequately cover the 275ft long by 120ft wide arched ceiling, Obscura Digital used 32 Christie 30,000 lumen projectors for a total of 960,000 lumens. 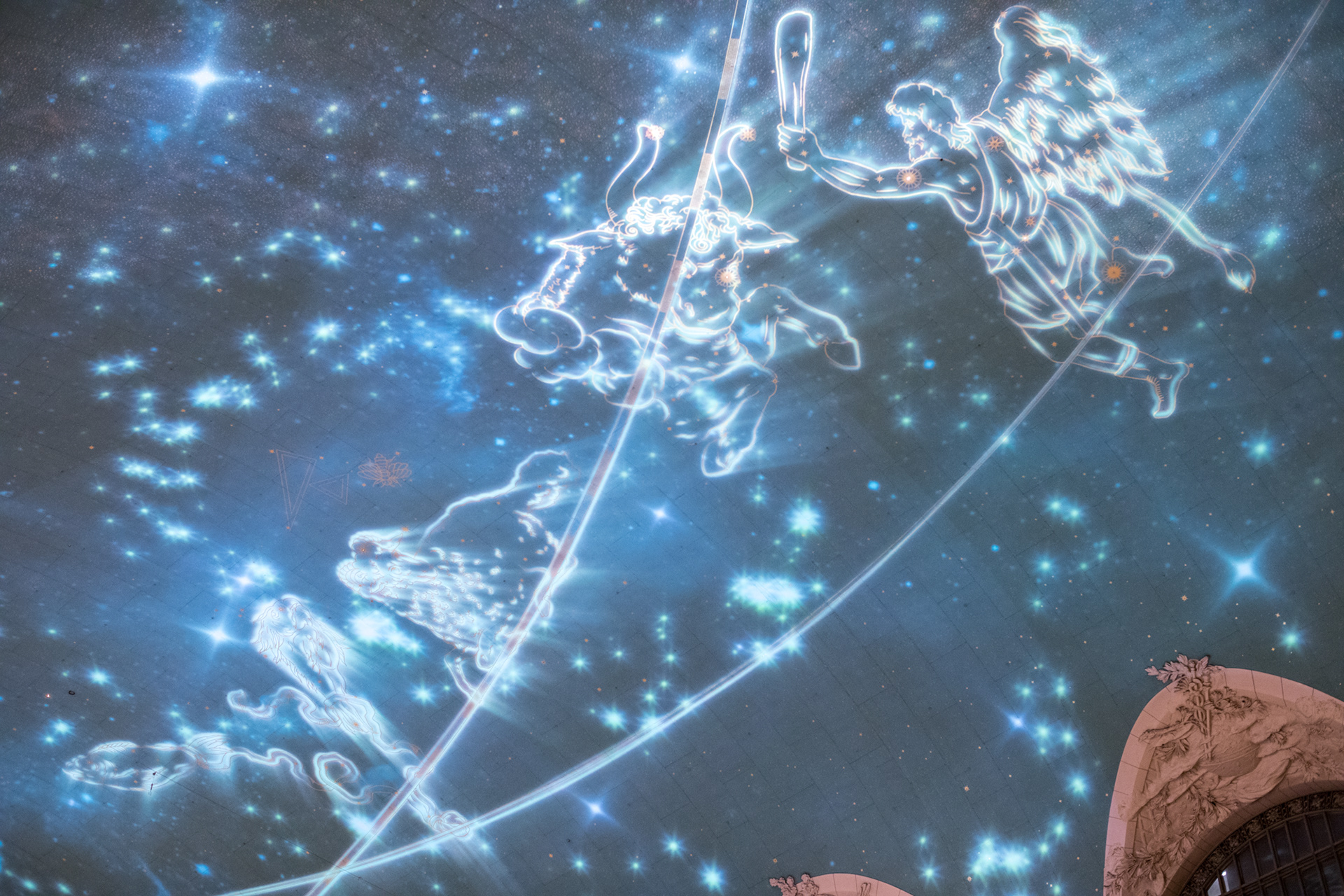 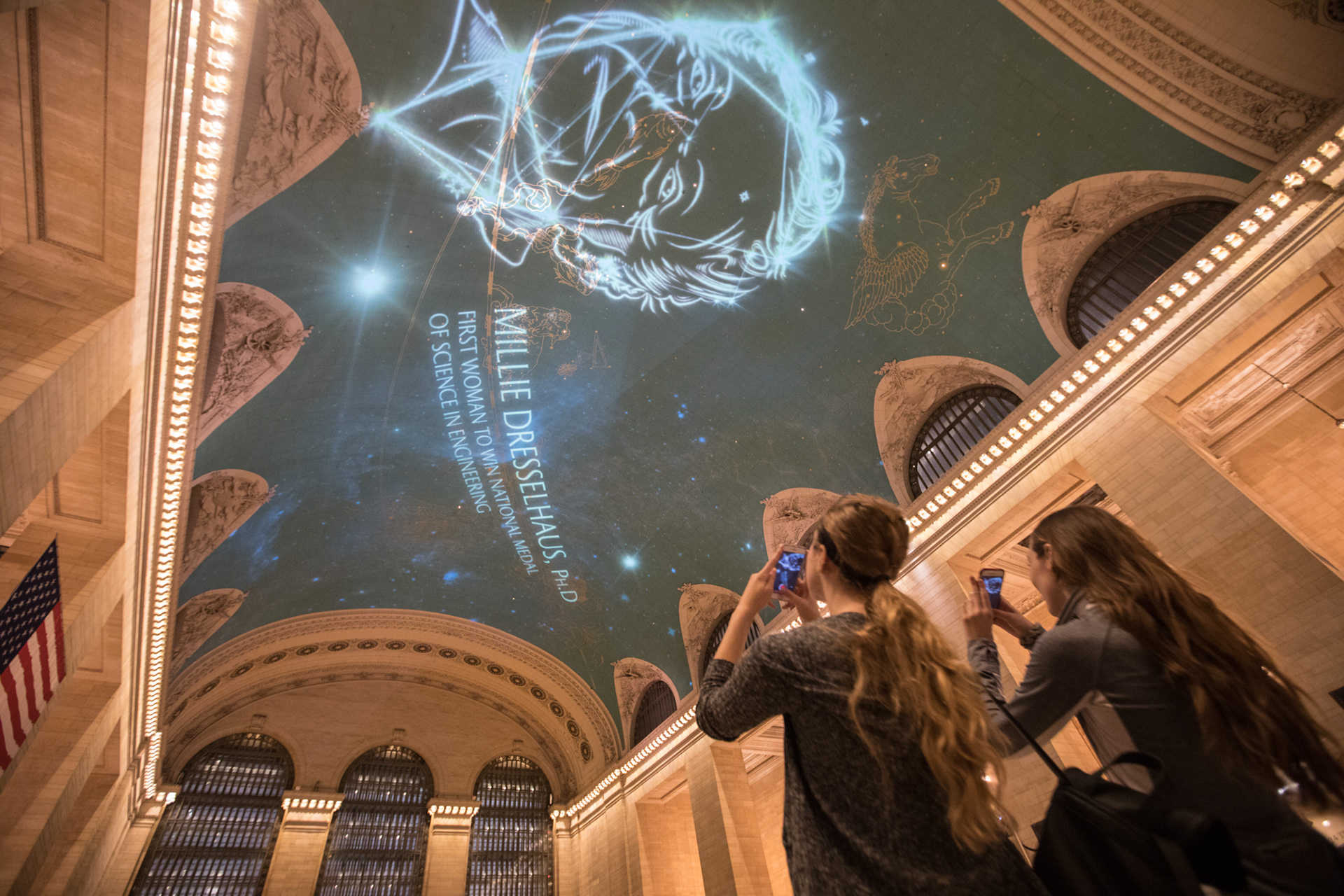 Here's the rundown of the impressive women, from the Forbes Article:
Millie Dresselhaus - They called her the “queen of carbon.” The pioneering MIT physicist who died earlier this year at the age of 86 was one of the first to study carbon nanostructures. Her decades-old discoveries are still helping scientists invent stronger, more powerful materials, as well as better electronics. She was the first woman to win the National Medal of Science (1990) and a fierce advocate for women in STEM.Vera Cooper Rubin's research in the 1960s pioneered a whole new field of scientific study: She confirmed the existence of dark matter. Emily Levesque, an astronomer at the University of Washington in Seattle, put it this way in Astronomy Magazine in 2016: “The existence of dark matter has utterly revolutionized our concept of the universe and our entire field; the ongoing effort to understand the role of dark matter has basically spawned entire subfields within astrophysics and particle physics at this point.” 'Nuff said.
Sossina Hale developed the first solid-acid fuel cell. Fuel cells convert chemical energy into electricity, and are already being used commercially in low-emission vehicles and portable power banks.
Neri Oxman created the field of 'material ecology.' She makes bright, textured art and architecture that draw from biology, computing, and materials engineering. In 2015, her team at MIT created the first 3-D printer for optically transparent glass, which they described as a kind of “molten glass sewing machine.”
Hadiyah-Nicole Green wants to create a better kind of cancer treatment. With a $1.1 million federal grant in hand, she's pursuing clinical trials for a laser-based nanotechnology cancer treatment. She hopes it will effectively eradicate tumors, while avoiding some of the common side effects of more traditional chemotherapy and radiation treatments.
Sudha Maniam - Another of GE's own, Maniam is Technology Leader of Clinical Systems and Signal Processing at GE Global Research. She's studying new ways to build medical devices. In 2000, she co-patented a new and improved detector system for cardiac MRIs (heart disease imaging.)
Kira Radinsky - When she was in her 20s, Radinsky created software that can mine historical data and news reports to predict global disasters and disease outbreaks with ~70-90% accuracy. Today, she directs data science at eBay.Laurie Leshin - The geochemist has worked for both former President George H.W. Bush and former President Obama. Leshin first served on President H.W. Bush's commission for space exploration, before becoming a senior manager at NASA's Goddard Space Flight Center. Today, she is the first female president of Worcester Polytechnic Institute. Oh, and she's been marveling at Martian rocks since she was 10.

Jess Melbourne-Thomas led an all-women group of scientists to Antartica in 2016. She uses mathematical models to study how marine ecosystems might respond to climate change in the future.

Megan Smith - The First woman appointed as United States Chief Technology Officer (CTO) Smith worked in the White House from 2014-2017. Before that, she was vice president of business development at Google, where she spent more than a decade. She told Forbes she's honored to be on the ceiling at Grand Central this week, and that the GE project is “a big deal:”
“Women of all races and men of color have been big contributors to science and technology and innovators at the most elite levels, we just... lost the stories,” Smith said on opening night. She hopes the ceiling projections will inspire commuters: “To have it at the hub [Grand Central], here in New York, where everyone is coming through... and having that sort of flow into their thinking: How might I use science and technology like these people, to solve the challenges that I'm facing?”

Sabrina Gonzalez Pasterski built her own aircraft at 13, and piloted it solo when she was 16. Today, she's pursuing her PhD in theoretical high energy physics at Harvard University. Nbd.
Danielle Merfield - GE was bound to include a few of their own. Merfield is Vice President of GE Global Research where she leads research into how to help “machines talk to each other” as GE puts it, with applications for aviation, healthcare and energy. 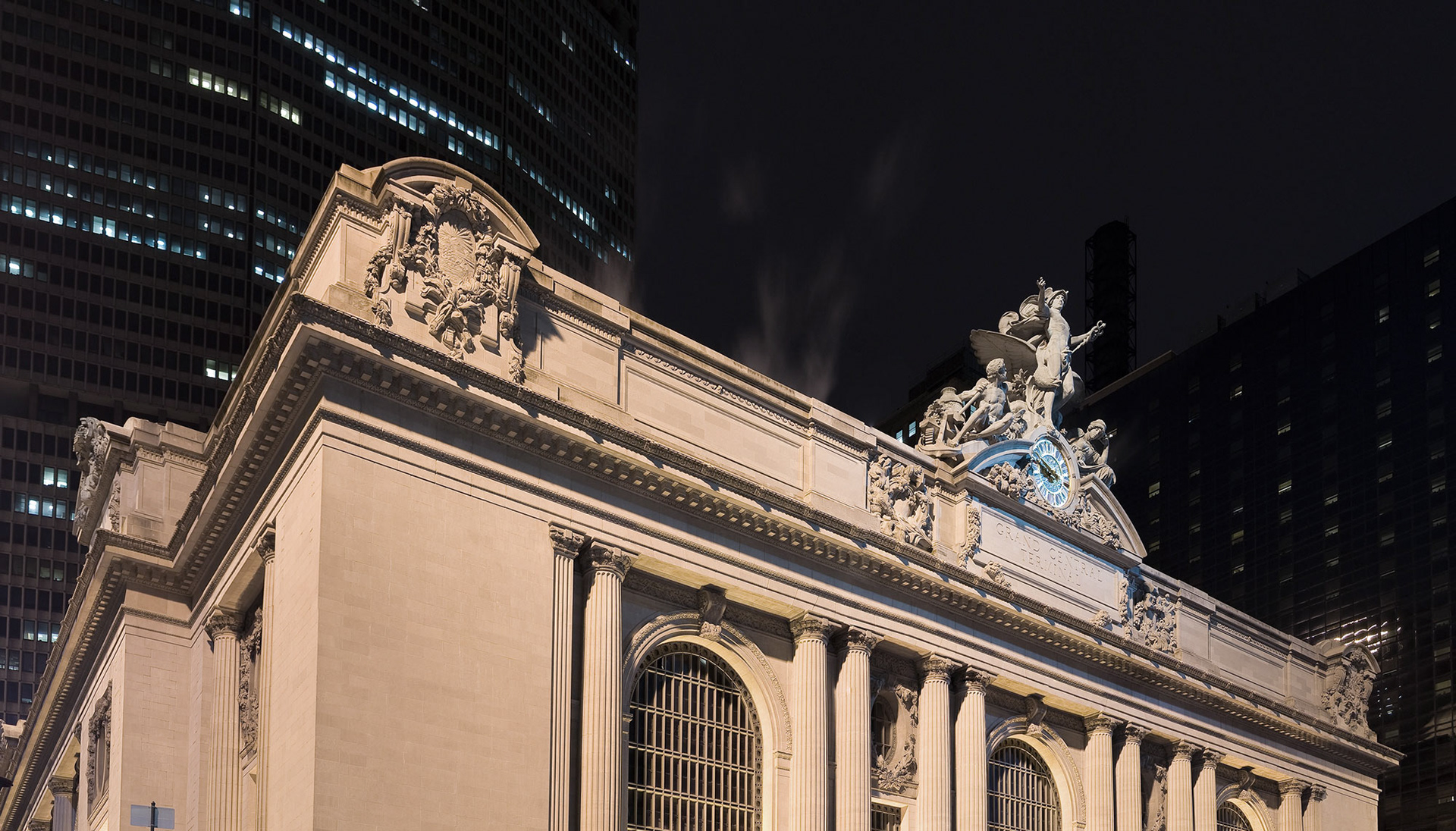